Warning: Private methods cannot be final as they are never overridden by other classes in /customers/f/b/7/melkersson.eu/httpd.www/cpr-wiki/includes/actions/Action.php on line 67 Worker - ColorPlanet

From ColorPlanet
Jump to: navigation, search
This page contains changes which are not marked for translation.
Other languages:
English • ‎svenska • ‎русский

Workers are entities you create in the Worker Spawner. Their main use is gathering Crystals from matching Fountains. They can also be merged into higher level, modulated to other colors and finally transformed into Transmitter Parts.

Workers are your main tool for gathering Crystals.

There is a button beneath the workers in the workers view where you spawn workers. By tapping it, you can create a new worker of your attuned color.

The first one is free. After that, there are two options to build more:

After spawning the first worker, a countdown will appear next to the Spawn Worker. When it reaches 0, a new worker can be built for free. Then, another countdown will begin, and so on.
The recharging time will extend by 5 minutes with every workers you have maxing at 6 hours. It can be lowered with Monuments.

Instead of waiting for free recharge, crystals can be paid for more workers (note: this option won't increase the waiting time). The prices are:

A placed worker collects crystal at the rate of 1 per hour and comes back to you automatically when full or the fountain dries out.

Steps taken to decide the level of a new worker.

2. Flip a coin. (If the worker is same level as your worker spawner you always "lose")

4. Add the worker to your worker pool.

The coin has a 50% + small bonus chance to "win". This bonus is based on your worker spawner level and number of workers you already spawned in the current cycle.

You may merge two workers of the same level to a worker of higher level, but not higher than the level of your worker spawner.

Upgraded workers can have improvements:

Capacity
How much a worker may carry back to you.
Concurrency
Placing your workers at the same fountain as opponent player's workers
Cooperation
If you want to place several workers at the same fountain. Specifies how many of your own workers that may already be on a fountain when placing that worker. I.e. you may have a low level worker with no cooperation on a fountain and place another worker having at least cooperation 1, and then place yet another having at least cooperation 2, etc.

How upgrades gets applied

All your workers can also be improved when you are part of a Team that has Monuments.

Modulate workers (in other colors)

Workers exist in 5 different colors, used for gathering crystals in their color. 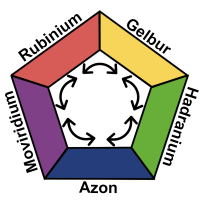 The level of the Worker Modulator limit how many workers you may have of that color. You can have unlimited amount of workers in your Primary Color.

When you have a Transformer Facility you may transform the worker into Transmitter Parts used for mounting Transmitters. The color and level of the worker affects what you get, but randomness is involved too.

Some notes about the probabilities:

First your idle workers and second the workers placed on Fountains.

This is where you can bring placed workers home, and do the actions described above on idle workers.